GIG Karasek's Sappi Saiccor evaporation plant, with an evaporation capacity of 16 MW, is the world's largest implemented plant of its kind in the sulfite industry.

The plant operates with high-energy efficiency and guarantees durability due to its good cleaning properties.

For the Vulindlela project of the Sappi Saiccor pulp mill, GIG Karasek implemented the world's largest evaporation plant with mechanical vapor recompression. In this article, we show the project as a practical application in the sulfite industry and provide an overview of the basics behind the process as well as the possible applications in pulp processes.

Sappi Saiccor is the world's largest pulp producer for the viscose fiber industry based on the sulfite process. The Saiccor mill is located 50 km south of the port of Durban in the South African province of KwaZulu-Natal and is one of the production establishments for Sappi Pulp.

An important objective of the Vulindlela project was to increase the plant capacity of the Saiccor mill from 783,000 tons to 890,000 tons per year. At the same time, production costs and the mill's environmental footprint were to be reduced by decreasing its reliance on fossil fuels.

In its entirety, the project included the installation of a new evaporation plant, a recovery boiler and a screening and washing plant, upgrades to the bleaching plant, improved recovery circuits, and additional digesters.

GIG Karasek supplied the evaporation plant with mechanical vapor recompression for the concentration of the sulfite liquor. The innovative process solution has a positive effect on the cycle due to high-energy efficiency and low emissions, which saves valuable resources

For the production of pulp, the fibers must be separated from the wood. The wood chips are first broken down in a complex cooking process using suitable chemicals, which breaks the bond between the pulp fibers and lignin.

The pulp is separated from the unbroken wood particles and washed. In this procedure, the fibers are separated from lignin and resins and is then processed separately:

1. Fiberline: The cellulose and hemicellulose fibers are cleaned, bleached, dewatered, and dried in further processes.

2. Chemical Recovery cycle: The chemical recovery (containing lignin and resins) produced during the washing process, is too thin for direct combustion and must be evaporated. The sulfite liquor enters the evaporation plant as feed, where it is concentrated and only then fed into the liquor boiler (recovery boiler) as fuel.

The recovery boiler, in turn, generates high-pressure steam, while simultaneously converting the main chemicals in the used cooking liquor into cooking acid for reuse in the pulping process. This completes the sustainable cycle.

At present, multi-stage evaporation plants with live steam as the heating medium, are primarily used in the various pulp processes. In the sulfite industry, mechanical vapor recompressors (MVR) are also used for pre-evaporation of lye.

This technology is particularly useful at sites with favorable electricity tariffs or limited live steam/cooling water resources. The process is also highly relevant for the DACH region (Germany, Austria and Switzerland), because a significant proportion of pulp producers still use the sulfite process. Also around the world, some pulp sites are working with the sulfite process, where this technology could also be used on a larger scale. 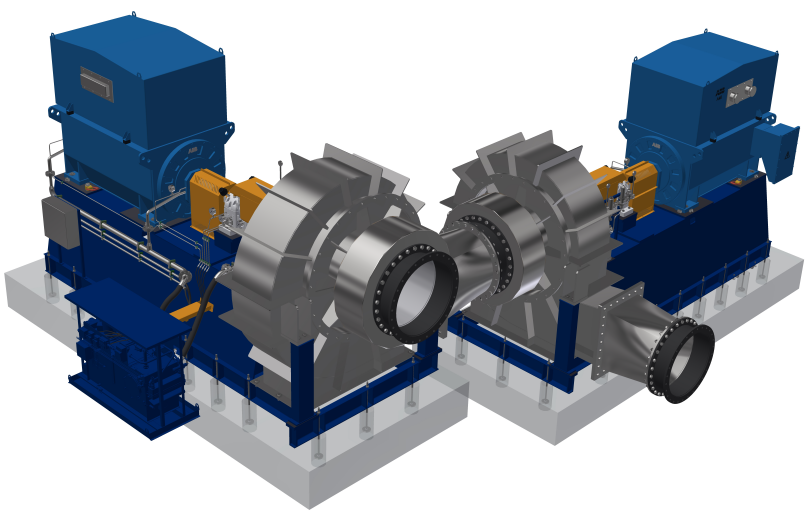 For GIG Karasek, the Vulindlela project was the first and largest project on the African continent. The project started in May 2018 and was completed as scheduled in September 2021 despite Corona and all other difficulties. The outstanding partnership with the client, the extensive remote work, and a strong construction site team, made this possible, despite the many challenges.

Project capacity and scope of delivery

The project volume was > 23 million euros. The evaporation plant was supplied on an EPC -basis (Engineering, Procurement, and Construction of the evaporator plant, including pumps, piping, valves, steel structure, insulation, HSE, and commissioning). The customer provided the wiring and programming. The parts and components were procured globally and delivered from Europe, Asia and South Africa.

The evaporation plant was built in the heart of the pulp mill, where an old plant had previously been demolished. The available space on the heavily frequented construction site was relatively tight. To use Sappi’s words: "The plant is being built on a postage stamp“. Despite these challenging conditions, the construction site team worked a total of 230,000 hours without any incidents. 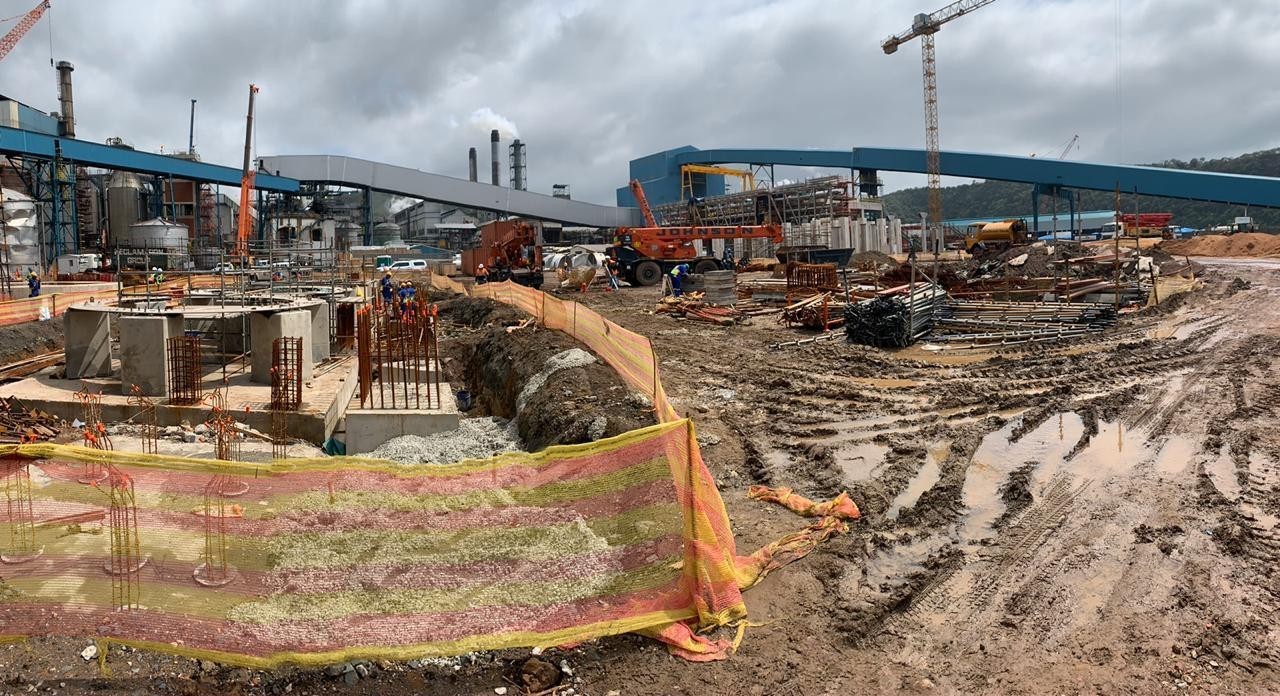 The Sappi Saiccor evaporation plant is the largest implemented plant of its kind, in the sulfite industry worldwide. With the enormous compressor capacity of 16,000,000 watts, 300 tons of water are evaporated, per hour, from the process in order to burn the sulfite liquor in the subsequent combustion boiler. The electrical power output is roughly equivalent to the output of the Graz Mur power station or 400,000 light bulbs (40W).

Durability due to its good cleaning properties.

As already mentioned, the unique feature of this system is that the medium can be concentrated directly from the input concentration to the desired final concentration by mechanical vapor recompression. In addition, the plant is distinguished by excellent cleaning properties, which guarantees durability.

The plant consists of the Tank Area (thick liquor, thin liquor, condensate tanks), four huge falling film plate evaporators, and the fan area with four mechanical vapor recompressors. The evaporators each have a height of 14 meters, a diameter of over 6 meters, and a weight of 120 tons.

The individual tanks were prefabricated on the site with local suppliers and then mounted by crane on the previously installed foundation. 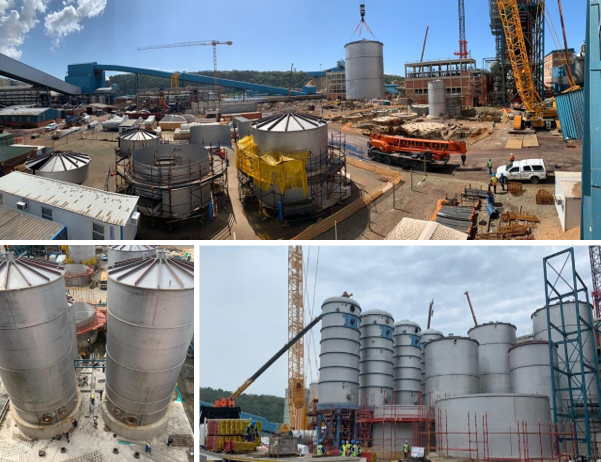 The four plate falling film evaporators were manufactured in Asia under the supervision of GIG Karasek, delivered by ship in South Africa, and then transported to the construction site by special transport. 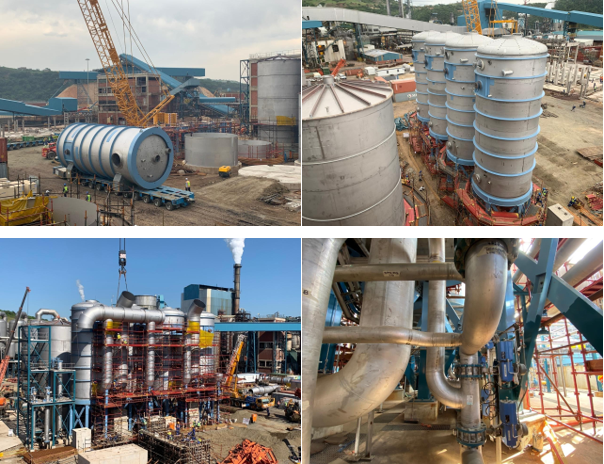 The process steam (vapor) is raised to a higher temperature level, consequently increasing to a higher energy level with the electrically driven mechanical vapor recompression system (radial fans) and then fed back into the process as fresh heating vapor.

Consequently, high steam losses can be avoided. Plate falling film evaporators, on the other hand, are very easy to clean and provide a long service intervals. The implemented system thus operates in a very energy-efficient and environmentally friendly manner.

Sappi Ltd. is the world's leading provider of solutions for paper, paper pulp, dissolving pulp, and biorefinery solutions, with headquarters in Johannesburg, South Africa. Sappi Saiccor's chemical pulp is produced using a unique cellulose chemistry technology from sustainably grown eucalyptus. In terms of a circulatory economy, sustainable production processes are maintained by production facilities, many of which are operated with bioenergy from steam and waste streams.

Sappi employs over 12,400 people in more than 35 countries and operates manufacturing facilities on three continents (ten production sites in Western Europe, four in North America, and five in South Africa). The product range extends from raw material products such as chemical pulp for textiles, pharmaceutical, and food applications, pulp and biorefinery products, to end products such as graphics, packaging, and specialized papers.

"GIG Karasek was selected to supply the Evaporator plant due to their good technical ability, as well as good performance at other Sappi Mills in Europe. GiG Karasek has a good understanding of the unique challenges faced in Sulphite Evaporators and were willing to listen to problems faced at Saiccor and amend their designs to overcome these problems by implementing cost effective solutions. The project execution and co-operation on site was also very good. GIG Karasek’s response to problems and issues was immediate and effective. I would like to thank GIG Karasek for a successful project, good equipment performance and excellent service and co-operation."

"GIG Karasek handled the Vulindlela evaporation project in the very best and professional way in all aspects: engineering, implementation , quality of equipment, erection, safety, commissioning etc.
with a very knowledgeable and dedicated personnel that always was acting very professional and very cooperative.