Biodiesel distillation: Why the short-path evaporator is the better option compared to the rectification column.

Biodiesel production from raw materials such as used cooking oils and fats is becoming increasingly important.

However, not every process is equally suitable for biodiesel distillation. We compare the short-path evaporator to the rectification column.

As part of international efforts to achieve sustainable development, biodiesel production from raw materials such as used cooking oils and fats is becoming increasingly important. However, not every process is equally suitable for biodiesel distillation. In this article, we compare the two methods and highlight the main advantages of the short-path evaporator in terms of effectiveness, flexibility, cleaning, as well as operating and investment costs. 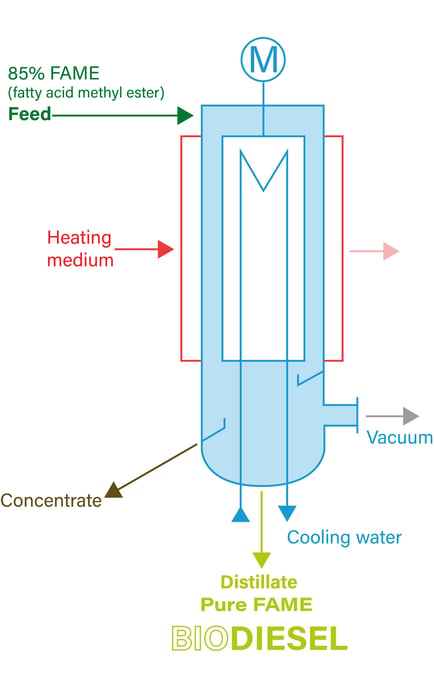 The short-path evaporator combines a thin-film evaporator and condenser in a single apparatus. It consists of a vertical body with an external heating jacket, a rotor with self-adjusting wiper elements, and an internal condenser. As a result, it is possible to process different viscosities through special built-in components and thus process more varied products.

The internally rotating rotor system distributes the mixture of substances fed in via the wiper system on the heated evaporator wall, in order to evaporate the low-boiling components. The vapours are condensed spontaneously in the built-in condenser, are liquefied again and discharged as distillate. High boiler droplets do not reach the condenser thanks to efficient droplet separation in the apparatus.

The non-condensed product vapours and inert gases enter the vacuum system through the vacuum nozzle via the cold trap. The non-evaporated, liquid product portion flows as film into the lower section of the short-path evaporator, is collected in a tray and leaves it after a short time via the product outlet.

In the rectification process, liquids with two or more components are separated through multiple evaporation and condensation stages. The repetitive processes take place in a vertical rectification column. As a result, the rising vapor stream and the down-flowing condensate stream are in constant material and heat exchange (countercurrent principle).

By supplying thermal energy, the liquid mixture which is to be separated, is brought to boiling point in the re-boiler at the bottom of the column. The more volatile components, evaporate, rise in the column and liquefy in the downstream condenser.
In contrast to the short-path evaporator, only a portion of the overhead condensate is withdrawn and collected. At the same time, the rest is fed back into the column head as reflux.

Built-in components in the form of structured and non-structured packings are used to intensify the exchange between gas and liquid. These are usually various metal fabric or plastic rings to increase the surface area critical to the separation process.

Rectification columns are a tried-and-tested technology for producing biodiesel of specification-compliant quality. Short-path technology also offers the possibility of achieving optimum quality even with high viscosity and heavily contaminated products such as biodiesel while conserving resources and products. 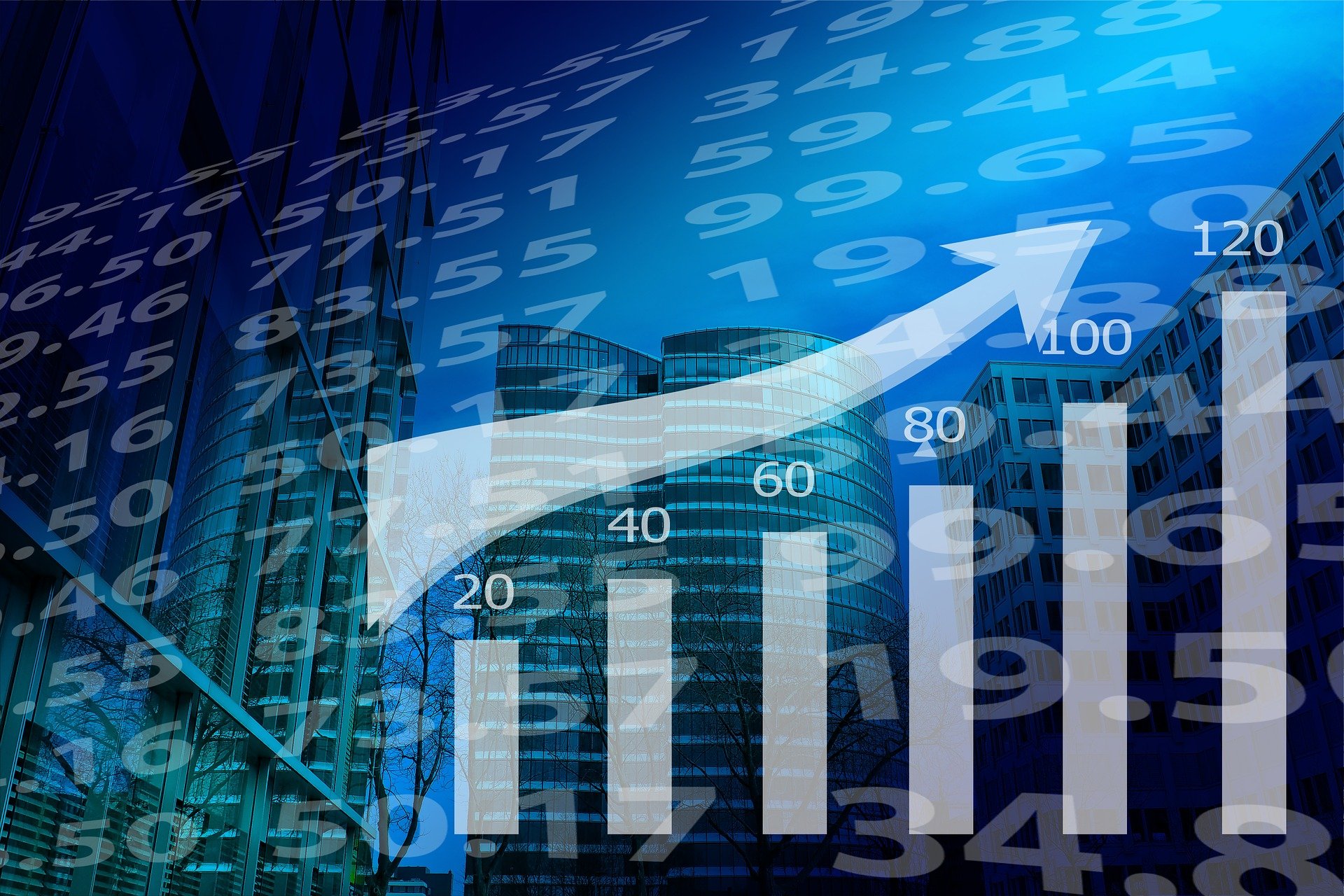 An overview of the advantages of short-path technology compared to rectification:

The multi-stage rectification column has advantages where fractions must be separated, and a higher degree of purities must be produced. Typical application areas are primarily the petrochemical industry and the large-scale production of basic chemicals.  The separation via column is a very complex process, which is also extremely difficult and cost-intensive to operate.

For biodiesel distillation, rectification columns are oversized and downright luxurious, requiring only one separation step between heavy and light boilers. As a result, the thermal separation of only two components can be achieved much more effectively and, above all, cost-efficiently with single-stage short-path distillation.

A significant advantage of the single-stage short-path technology is that it ensures product quality through minimal temperature load and short residence times. In addition, the built-in condenser minimizes the path of the vapours between evaporation and condensation and leads to a gentler evaporation process in the fine vacuum.

Heat-sensitive products such as plant-based or animal-based oils tend to decompose or react undesirably during processes in conventional evaporators. In order to avoid this, the product is distilled in a fine vacuum between 1 and 0.001 mbara at a high evaporation rate. By lowering the working pressure, a considerable reduction of the evaporation temperature is ensured so that even sensitive organic substances such as biodiesel can be separated gently. 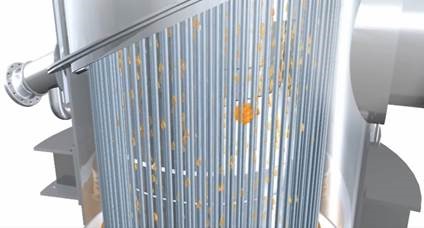 The short-path evaporator with built-in condenser is particularly suitable for biodiesel distillation due to its gentle product working process. © GIG Karasek

Due to the built-in components and the reflux ratio, the mixtures remain in the rectification column for a significantly longer time. Unfortunately, this is also associated with undesirable side effects. The operation of the short-path evaporator thus enables a much more product-friendly and stable process for particularly sensitive products such as biodiesel.

However, there is a resistance in a rectification column due to the column internals, the geometry and the outflowing return. Therefore, the unhindered flow of the vapours is restricted which, depending on the type and number of column internals, leads to a respective pressure loss.

4. High flexibility due to dynamic operation

A column must be run as a static system over several days until a stable condition is established. If problems occur in the pre-process, this will affect the column very quickly and for a long time. However, rapid adaptation is not possible since the column reacts only very slowly to changes in input substances and input concentrations.

With a short-path evaporator, on the other hand, a much more dynamic operation is possible with single-stage separation processes, thereby offering numerous advantages, especially for raw biodiesel, which may vary greatly in composition. For example, different flow rates can be set, heating reduced or increased, or the rotor speed influenced.

Moreover, with short-path evaporators, necessary adjustments to fluctuating compositions of the feedstock can be carried out without having to disassemble the plant manually, as may be the case with a column. The operation can be interrupted and restarted if necessary. Batch operation is thereby possible.

5. Fouling effect is minimized with the short-path evaporator

A rectification column usually runs for a year or more without shutting down, especially with natural products such as biodiesel, which favours the undesirable formation of deposits on the surfaces of the column packings (fouling). As a result, the heat transfer efficiency decreases, the pressure drop increases and the separation quality decrease.

This enormous disadvantage is eliminated with biodiesel distillation in the short-path evaporator. The rotating design prevents fouling in the formation process. In addition, the wiper blades continuously sweep along the film on the heating wall, thereby ensuring continuous fluid-mechanical cleaning of the heating surface.

The wiper blades of the short-path evaporator continuously clean the heating surface, making it ideal for fouling applications. © GIG Karasek

Both distillation systems have to be shut down once a year for maintenance purposes. However, additional shutdowns and cleanings are impossible with the column without strongly influencing the operation. In contrast, a short-path evaporator can be cleaned very easily even during the year by filling it with a cleaning agent and slowly rotor.

The operating costs of both separation processes are determined by up to 95 percent energy consumption. The rectification column amounts to twice to three times that of an equivalent short-path evaporator, depending on the reflux ratio. The following applies:

Depending on the task at hand, it is necessary to access each case and to weigh the advantages. Although a column enables a higher throughput level, it is also associated with significantly higher energy costs. 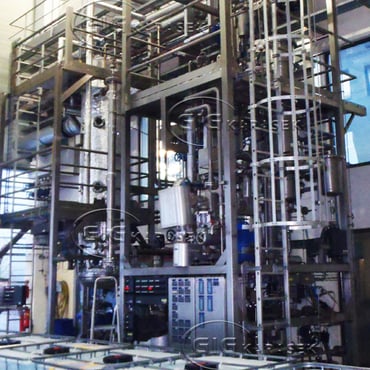 In the GIG Karasek Technical Center, a wide range of high-quality and interconnectable equipment is available for test purposes to find the optimum process. © GIG Karasek

GIG Karasek develops individual, tailor-made solutions and plants, which are designed based on the feed quantity. The comparison of two equivalent plants with a feed quantity of 7.5 tons/hour which, results in a cost ratio of 3.5 to 1 in favor of the short-path evaporator at current material prices. The equipment required for evaporation, stock separation, and condensation was included in the calculation.

The drastic difference in investment is determined on the one hand by the high costs of the column packings, and on the other hand, the column must be built very largely compared to the short-path evaporator. The latter drives up the material costs of the rectification column due to the difference in weight and steel tonnage.

GIG Karasek’s, technical competence center has its own test and development facility. There, we offer interested companies the opportunity to have their biodiesel feedstock purified on a test basis in a short-path evaporator. The test series are carried out with pressures and temperatures, which have proven to be productive, and are based on hundreds of test series. After completion of the tests, the customer receives 30 to 40 samples and a detailed pilot plant test report for further analysis of the degrees of separation.

Using a rectification column for biodiesel distillation is like using a sledgehammer to crack a nut. The process is suboptimal for applications with only one separation cut-off, as it is very time-consuming and expensive. A short-path evaporator not only enables gentler stock separation but also offers a higher degree of effectiveness and flexibility. Easy cleaning and significantly lower operating and investment costs are further advantages of the short-path technology.

White Paper Bio Diesel: How to get beyond 96% Purity.