Because of severe fouling, the sulfite process places high demands on evaporation plants. Therefore, over the years, various evaporator models were developed to solve this problem in the best possible way

Various technologies and evaporator systems have been developed over the past decades to concentrate sulfate liquors and to solve the problem of fouling as effectively as possible. Falling film evaporators are currently the leading technology in this field. At the same time, older evaporator types are still widely used. In the following, we show the principle of the different technologies and their advantages and disadvantages in dealing with the challenges in the sulfite process.

Rising film evaporators are part of the first evaporator generation in the pulp and paper industry. However, the technology is mainly used in the sulfate process and is seldom seen in the sulfite process.

In this particular type of evaporator, the leaching solution is conveyed from the bottom to the top through a shell-and-tube heat exchanger. 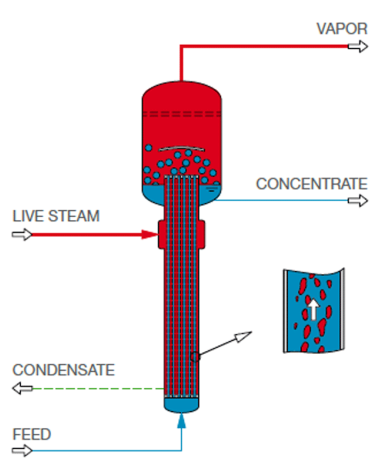 A significant advantage associated with this technology is the comparatively low electrical energy consumption, as no pumps are required. At the same time, however, in the event of difficulties encountered in the process, it is not possible to rectify the fault with the aid of the pumps. Rising film evaporators, therefore, have a very narrow operating window and are difficult to regulate.

Rapid fouling & clogging of the pipes

The rising film evaporator is prone to rapid scaling and clogging of the inner surface of the tubes. The deposits that form inside the heat exchanger are challenging to remove. Once the tubes are clogged, all the tubes or the entire apparatus must be replaced. Failure to do so will result in the loss of the heating surface for evaporation and a reduction in evaporation performance. This is also one of the main reasons modern processes in the sulfite industry have replaced this technology.

An advanced version of the rising film evaporator is the forced circulation evaporator with a separate heat exchanger. Although these evaporator types are still in use in the cellulose industry for the sulfite process, they are rarely built

Forced circulation evaporators are better suited as concentrators than rising film evaporators because they can deal with high viscosities more effectively. 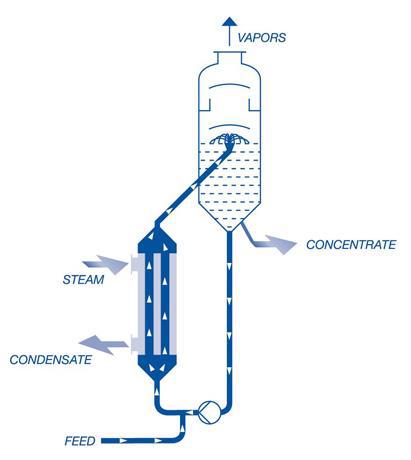 A significant disadvantage associated with this technology is the comparatively low heat transfer, which requires very high circulation rates to achieve the desired evaporator performance. As a result, the circulating pump consumes a considerable amount of energy, leading to significantly higher operating costs than the rising film evaporator.

This technology has not been able to solve the fouling and corrosion problem either. Cleaning the heat exchanger requires taking the plant out of operation and removing the heat exchanger. Depending on the type of heat exchanger, removal or cleaning may be more or less time-consuming and thus cause operational standstills. In principle, chemical cleaning is possible, but the sulfite process always leads to heavy fouling and, consequently, corrosion.

Therefore, the working life of the forced circulation evaporator is limited. In most cases, the heat exchanger needs to be replaced altogether after an operating period of five to ten years. At costs of several 100,000 euros and a comparatively short operating time, this is a cost-intensive undertaking.

The next stage in the development of evaporator technology are tube falling film evaporators. These evaporator types are used primarily for low-fouling media and smaller-scale applications. For example, tube falling film evaporators can be optimally utilized in the sulfate process at low concentrations in the pulp industry. However, this technology is less suitable for the sulfite and sulfate processes at high concentrations.

IIn contrast to the two previous technologies, the liquor is no longer fed into the tube falling film evaporator from below but from above. 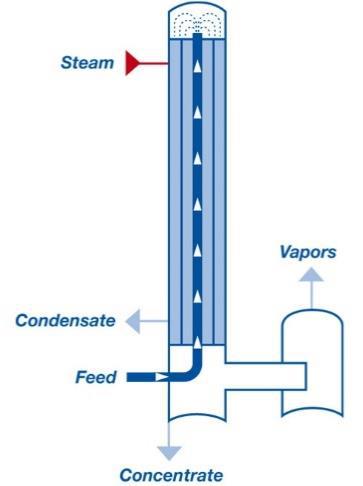 Compared to the forced circulation evaporator, significantly lower circulation rates are required due to surface evaporation directly at the heating surface. On the one hand, there is a shorter product residence time and, on the other hand, significantly lower energy consumption. At the same time, the use of pumps makes the apparatus more controllable and facilitates a larger operating window.

Fouling & clogging of the pipes continues to be a problem

Particularly in connection with sulfite liquors, the incrustations build up very quickly in the tubes, starting from the bottom, since the concentrations are higher in this area. Clogging can occur within hours or days, depending on the temperature and concentration. As soon as blockages occur, there is a risk that the tube will completely close up all the way to the top. Cleaning is then no longer possible. The heating surface becomes inactive, and the evaporator capacity in the affected tube is lost.

Also problematic are corrosions, which occur increasingly underneath the fouling deposits. Corrosion of the tubes up to pitting corrosion makes the heat exchanger sooner or later inoperable. Either the evaporator can be re-tubed, or the entire unit replaced. Both options are costly. Re-tubing means a shutdown lasting several weeks, which involves expenses amounting to several 100,000 euros per day in the pulp industry. The purchase of a new apparatus quickly reaches a higher 6-digit range and is therefore very expensive. 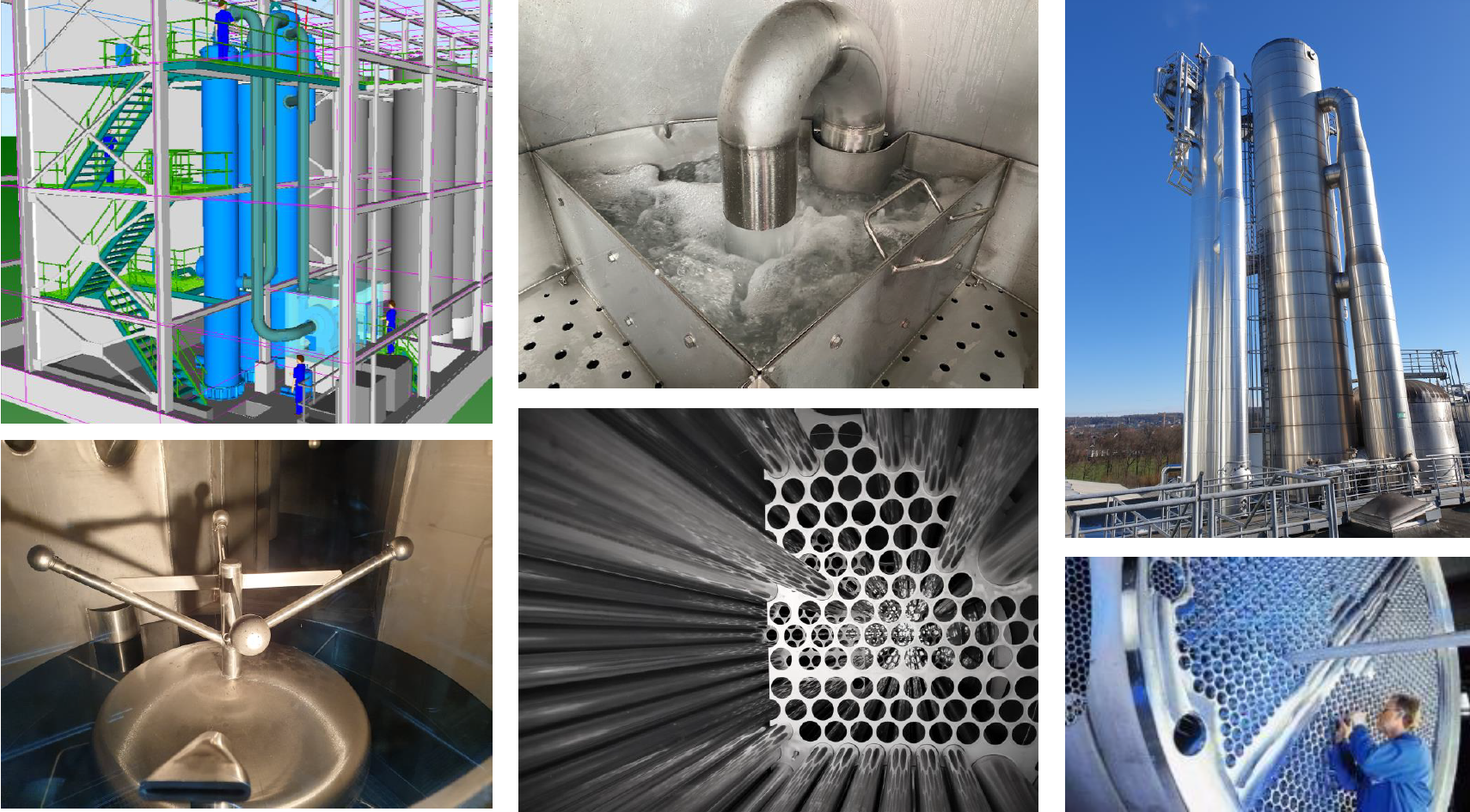 Tube falling film evaporators are easy to clean only in the first section of the pipes. © GIG Karasek

The spray falling film evaporator originated from seawater desalination and was sometimes used in the sulfite process. Unlike the above-mentioned evaporator types, the thin liquor is not fed through tubes, but is sprayed onto the heated tubes on the outside of the shell.

There were hopes that this would improve the cleanability of the heat exchanger. However, the technology failed to find approval because the same fouling and corrosion problems occurred as before like the other evaporator types. 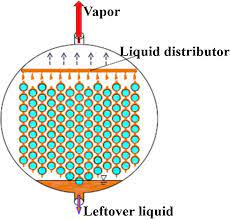 
The sulfite liquor is pumped into a distribution tray at the top like the tube falling film evaporator. The solution then flows down along the outside of the heating plates and evaporates. Due to the large distances between the plates and the cylindrical shell of the evaporator, the vapor produced has ample room to spread. 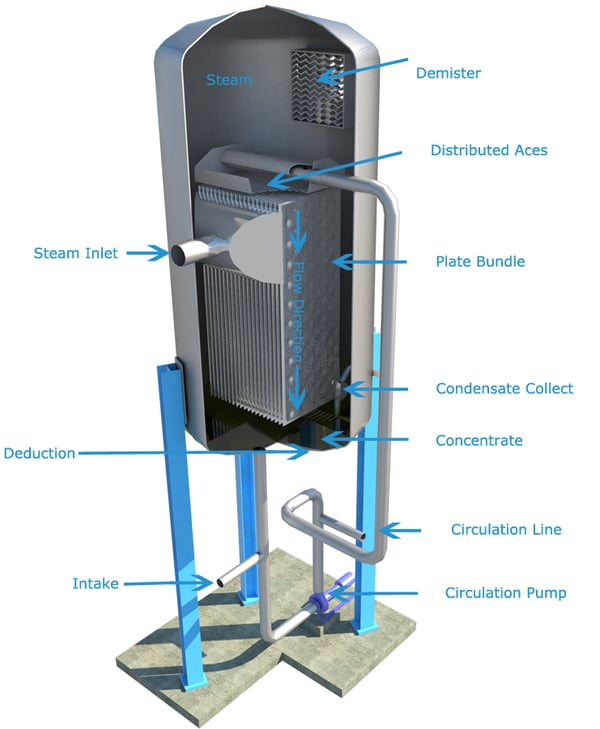 In this way, excellent separation of the liquid and vapor phases occurs, so plate falling film evaporators work very efficiently and are state of the art. Evaporation capacities up to 700t/h or more are possible. Furthermore, the slow flow rates also result in a low-pressure drop and low energy consumption. Therefore, only low circulating pump capacities are required. 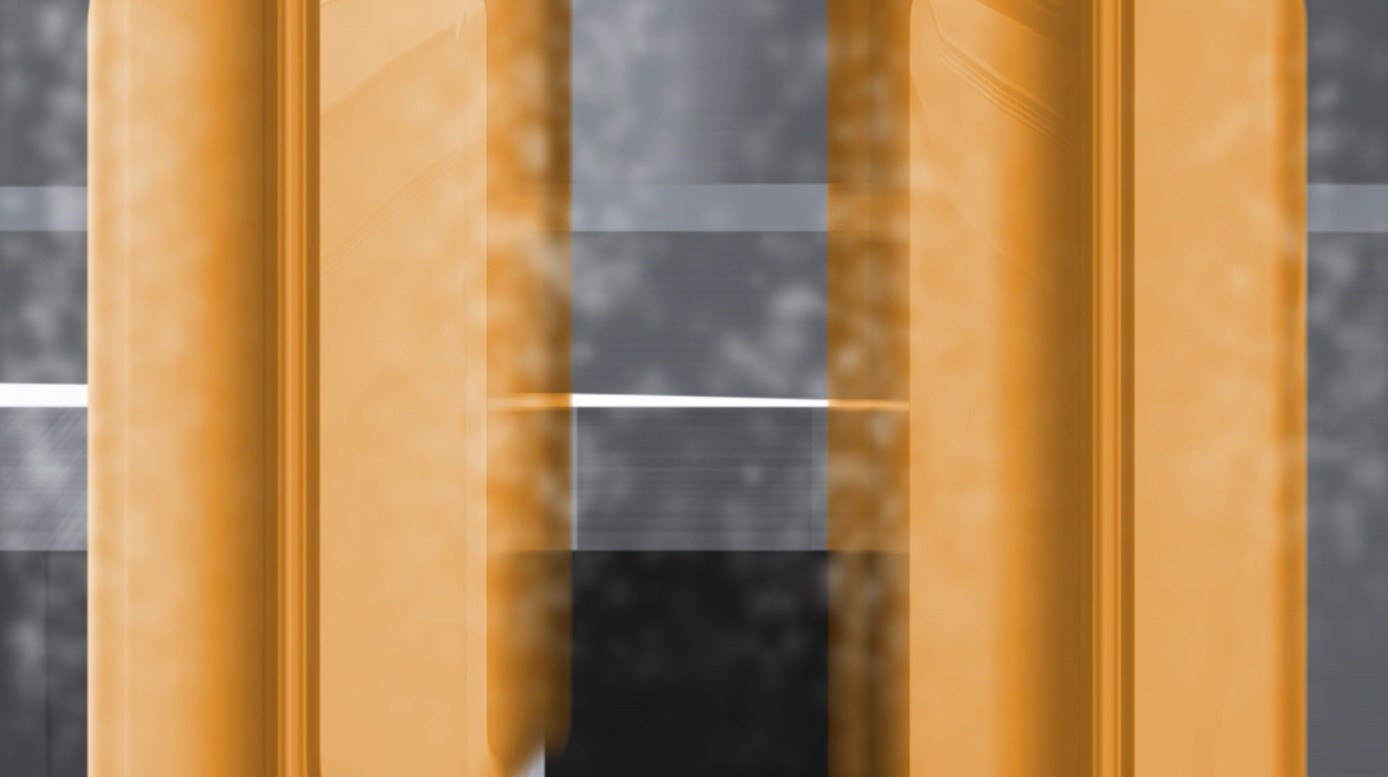 The core element of the plate falling film evaporator is resistance spot welded heating elements in different formats which are manufactured by using induction. Due to the unique manufacturing method of the plate bundles, the risk of fouling and corrosion is low, thus guaranteeing very long operating times.

The advantages of plate bundles can be summarized as follows: 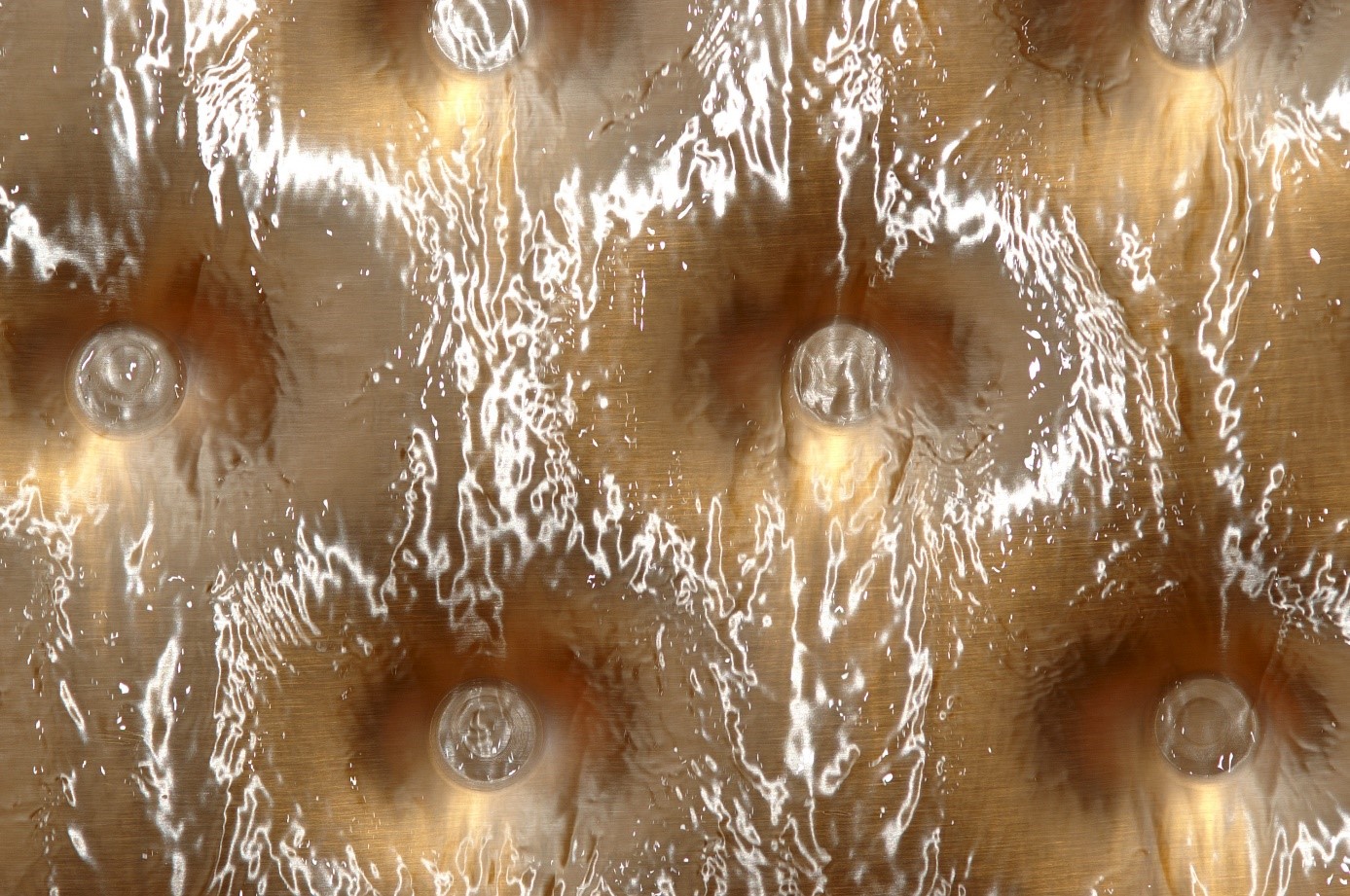 The medium is fed over the heating surface of the plate bundle, which is heated from the inside © GIG Karasek

Self-cleaning effect of the plates

The boards have the characteristic that, by using different operating and cleaning temperatures and the resulting different thermal expansion, gypsum coatings are chipped off. Due to this self-cleaning effect, little to no incrustations arise. This effect is not known in the tube falling film evaporator. 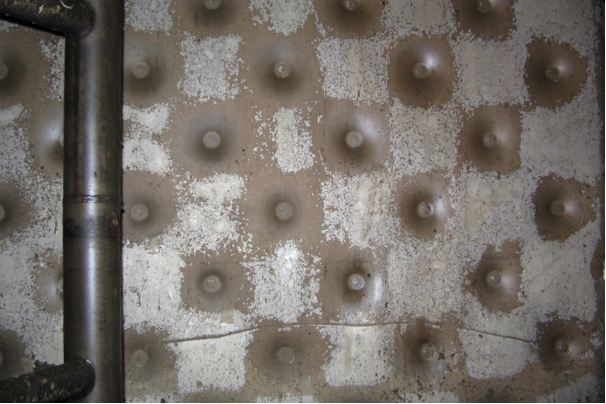 This technology enables the droplet separator to be installed into the evaporator. A separate apparatus is no longer required for the plate falling film evaporator since the low vapor velocity limits droplet entrainment. The droplet separator is also very easy to clean so that the vapor remains clean and the condensate has high quality.

Optimal cleanability thanks to accessibility of the evaporator

Uncomplicated exchange of the plate bundles

In the sulfite process, severe fouling is possible, so that in extreme cases the heating surfaces are impossible to clean. In such cases, an uncomplicated exchange of the bundle is possible. First, the evaporator body is opened at the top, then the bundle is lifted out, and a new one is installed. The replacement of the bundle is completed within the time frame of a normal operational shutdown. 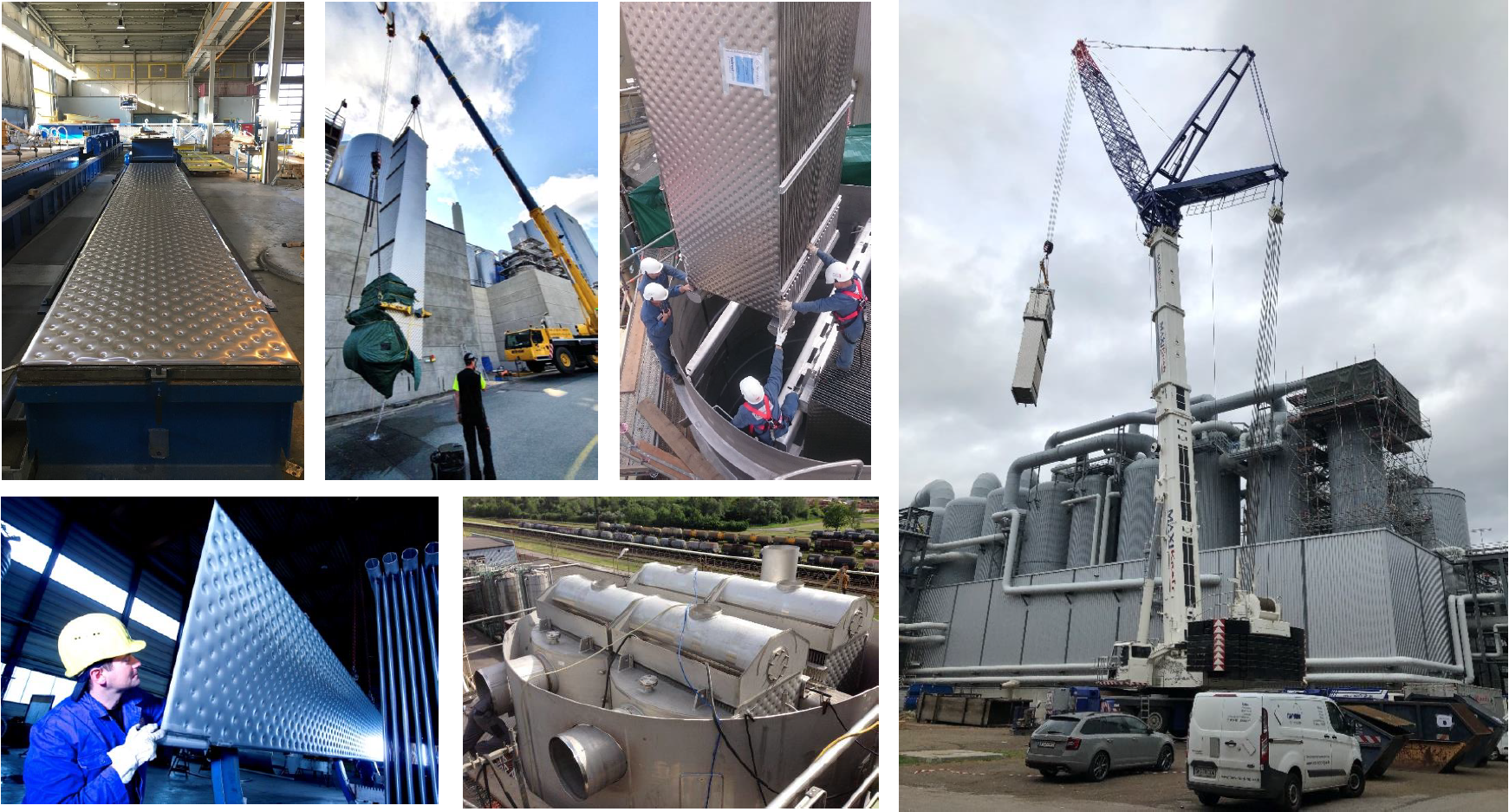 Conclusion: Evaporator types in the cellulose industry in the sulfite process

Rising film and forced circulation evaporators are hardly ever installed anymore in the sulfite industry because of significantly higher operating costs and poorer evaporation rates. Spray falling film, and tube falling film evaporators are also not optimally suited for use in the sulfite process, as they cannot satisfactorily solve the problem of fouling. Today, state-of-the-art is the plate falling film evaporator, whose technology offers significant technical advantages and ensures easy cleanability and thus a long service life for the apparatus.