There are three fundamental options for an energy-saving plant design. These include multiple effect evaporation plants with mechanical vapor recompression and combinations of these technologies.

Evaporation processes in the pulp industry using the sulfite process are often very energy-intensive, and the installed equipment is outdated. Given the spiraling energy costs, solutions are required to save energy at affordable prices.

There are three fundamental options for an energy-saving plant design. These include multi-stage plants, plants with mechanical vapor recompression and combinations of these technologies. These concepts will be presented below and compared according to their energy-saving capabilities.

To reduce live steam consumption, evaporation plants are designed as cascades. Only the first evaporator stage is heated with energy-intensive live steam, while the subsequent steps use the outflowing vapor steam from the previous location to heat the heating surfaces. In multiple effect evaporation plants using the sulfite process, five to seven stages connected in series are usually used.

Saving energy is achieved by using the condensation heat of the steam several times. For heat transfer to take place through several stages, the boiling temperature of the sulfite liquor in the respective location must be lower than the condensation temperature of the vapors on the heating side of the respective stage. Consequently, the pressure can be reduced continuously from the second stage to the last stage, thus reducing the boiling point.

As a result, there is a sufficient temperature drop in each evaporator stage for heat transfer from the vapors to the sulfite liquor. Therefore, the heating steam requirement decreases in inverse proportion to the number of steps installed. To sum up, the amount of steam required is approximately equal to the total amount of water evaporated, divided by the number of stages.

After the last stage, the vapor must be condensed and transferred to a coolant. For this purpose, large condenser surfaces are required, which must transfer approximately the same amount of energy previously supplied as heating steam. In addition, adequate cooling water at the lowest possible temperature is necessary to operate these condensers. 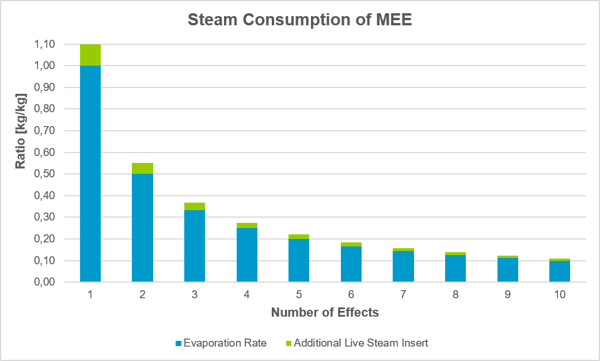 The addition of further stages is therefore only possible within the available temperature gradient, which is determined on the one hand by the temperature sensitivity of the medium (in this case sulfite liquor) and the maximum available heating steam pressure, and on the other hand by the cooling water temperature.

3. Investment costs increase with the number of stages

As the number of stages increases, the available temperature difference at the heating surface of each stage decreases. Therefore, the heating surface must be appropriately enlarged to achieve the desired evaporation performance, which means the investment costs increase as the number of stages rises. At the same time, the energy saved is not as great.

The number of possible stages is limited by the maximum available temperature gradient and the cost-effectiveness of different heating surfaces.

The objective is to find the optimal balance between energy and investment costs. GIG Karasek determines this based on dedicated customer requirements or current operating data of the plant in close cooperation with the customer. Therefore, the selected concept plays a central role in achieving the optimum economic design of a plant. 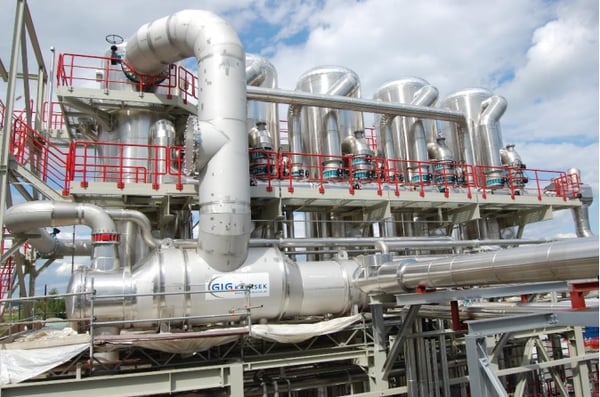 In addition to multi-stage plants, mechanical vapor recompressors (MVR) is used in the pulp industry to improve energy efficiency. Due to the drastic reduction of live steam, the technology is often used in combination with a single-stage or multi-stage plant.

Evaporation plants with mechanical vapor recompression are based on the open heat pump circuit principle, which means that the evaporation process is almost self-sustaining. The vapors produced in the stage are brought to a higher pressure and temperature level by an electrically driven compressor to obtain higher-grade steam.

This steam is then available again as heating steam and is usually used in the same stage to heat the evaporator heating surfaces. Therefore, mechanical vapor recompressors operate on the industrial heat pump principle, where multiple evaporation energy is achieved by introducing a fraction of mechanical energy. 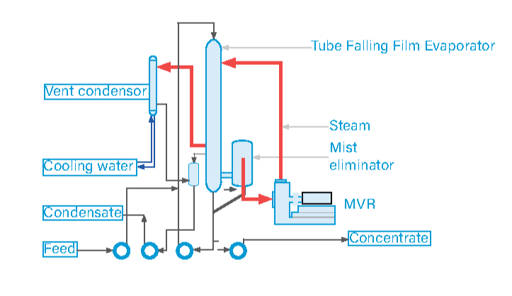 Most of the liquids to be evaporated have boiling point elevations due to the substances dissolved in them, which usually increase exponentially with the increasing concentration of the dissolved substances. Therefore, the vapor produced in a stage does not have the temperature of the medium but only the evaporation or saturation temperature of the water or the evaporating medium.

Since the temperature increase achieved by mechanical vapor recompression with standard machines is between 7 and 9 °C, the boiling point increase must be accordingly low for this technology. Therefore, the technology is particularly well suited for liquids with low solid concentrations or boiling point elevations, such as pulp liquors from sulfite processes.

To reuse the steam that heats the evaporator, its temperature must be increased by a boiling delay of 5 °C plus the proper gradient required to maintain evaporation ( according to experience, five °C). The steam must therefore be compressed to 110 ° C.

3. Design of mechanical vapor recompressor in the sulfite process.

GIG Karasek uses centrifugal fans with peripheral speeds of up to 300 m/s and more in the pulp industry. As a result, moderate boiling point increases can be achieved using only one compressor. For more significant boiling point increases, two or three compressors are used in series, depending on the equilibrium conditions. For example, in the sulfite process, one compressor is usually used for pre-concentration and two compressors in series for final concentration. However, since MVR plants cannot be enlarged arbitrarily, several vapor recompressors must be connected in parallel for processing high capacities.

In the past, it was primarily energy-intensive multi-stage evaporation plants that were installed, partly because of favorable energy prices. However, increasing live steam costs often make the operation unprofitable and drain profits.

Also, adding additional stages to reduce energy requirements or increase capacities is no longer possible or economical. There are various reasons for this, e.g.:

Plant operators who want to reduce their operating costs should therefore consider upgrading the system with electrically operated mechanical vapor recompressors. The investment costs for the conversion can rapidly pay off, especially if additional steam needs to be supplied. 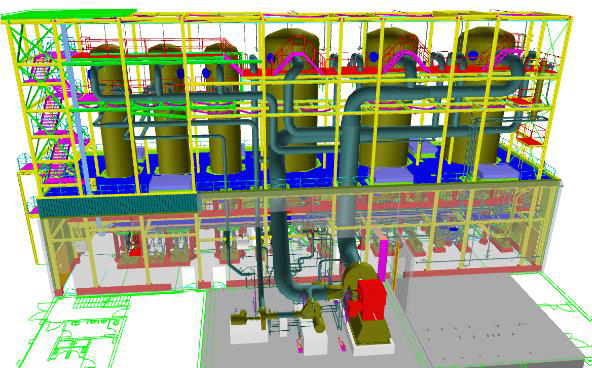 So far, it was the investment costs that were significant. However, considering the global energy situation, energy costs are becoming increasingly crucial regarding the overall costs. Ultimately, the decision for each pulp mill has to be made individually, depending on the general conditions and the local situation. In brief, the most important advantages and disadvantages of the processes are summarized once again:

The successful application of MVR evaporation technology requires the liquid to be evaporated to a low-boiling delay, such as that of sulfite liquor. In addition, a stable power grid is needed, and the price of electricity must be lower than the price of steam if the application of MBV evaporation plants is economical compared to multistage plants.

In direct comparison with single- or multi-stage evaporation plants, mechanical vapor recompression is a very energy-efficient process. This means that, for each ton of steam vapor, a comparatively minimal amount of electrical drive energy is required for the compressor motor. At the same time, there is no need for the cooling water that would otherwise be necessary, which means that additional operating costs can be reduced.

In most cases, the investment costs of an evaporation plant with mechanical vapor recompression are higher than those of a comparable multi-stage plant. Depending on the evaluation of the steam in the overall plant, the lower consumption in operation can lead to a rapid ROI. When expanding multi-stage plants, eventual costs for a steam generator must be accounted for along with the investment for the additional stage.


To remain competitive, optimizing energy use is given top priority given the global energy situation. Major reduction in energy costs can be accomplished using multistage evaporation plants and mechanical vapor recompression. Companies operating single- or multistage plants should consider upgrading their systems using vapor recompression. GIG Karasek offers decades of expertise in implementing energy-saving measures in the pulp industry and provides the best available technologies (BAT) to fulfill the requirements of the industry as far as energy efficiency is concerned.